Abrogation of bullfighting to the immaterial cultural heritage of France

The Paris Court of Appeals has agreed with animal protection organizations to reconsider the registration of bullfighting to the Immaterial Cultural Heritage of France. Bullfighting’s status has been officially repealed.
On June 4, 2015, our lawyers Eric Verrièle and Christophe Courage informed us that the Administrative Appeal Court of Paris (AACP), referred by CRAC Europe and Droits des Animaux, has stated that as of June 1, “the decision to register bullfighting to the inventory of the immaterial cultural heritage of France must be considered as having been abrogated” by the Ministry of Culture. Consequently, animal rights associations were contesting a decision which didn’t exist anymore, which is why the AACP has concluded to a dismissal of the charges (see below).

« Article 1 : There is no reason to rule on the conclusions of the associations “Comité radicalement anti-corrida Europe ” and ” Droit des animaux ” (.) »

Bullfighting enterprises and their fans will no longer be able to exploit the patrimony status as an excuse to perpetrate acts of animal cruelty. Before having been scratched from the books, the patrimony status of bullfighting had been denounced by Frederic Mitterrand when he was the French minister of culture. “Bullfighting is not an innocent tradition,” he said, “and I can only imagine all the closed-door dealings of elected officials to coerce a handful of functionaries to sign on in 2013.”

At this time in history, when France recognizes the sentient character of animals and that the European Commission states “the European Union believes in the importance of animal welfare,” it is high time to abolish bullfighting and on the wave of this victory, we will continue to propel forward towards justice for animals. 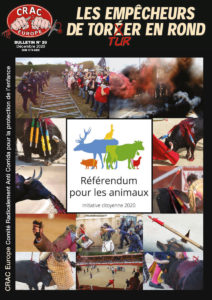